This handout picture released on January 24 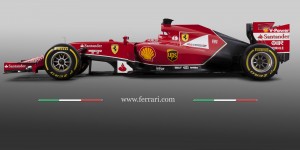 This handout picture released on January 24, 2014 by the Ferrari press office shows the new Formula 1 of the team Ferrari, the F14-T presented today. The car with which Fernando Alonso and Kimi Raikkonen will fly the Scuderia Ferrari flag in this year¿s Formula 1 World Championship will be called the F14 T. Prancing Horse fans from around the globe chose the name in a ballot that¿s run on line from 15 January to January 23 midnight. There was a total of 1,123,741 votes and the winning margin was just 19,104 or 1.7%, after a very close fight with F166 Turbo. The other three names on the list fared less well: third was F14 Scuderia (18.8%), followed by F14 Maranello (12.3%) and F616 (4.8%.) RESTRICTED TO EDITORIAL USE – MANDATORY CREDIT «AFP PHOTO / FERRARI/ FOTO STUDIO COLOMBO» – NO MARKETING NO ADVERTISING CAMPAIGNS – DISTRIBUTED AS A SERVICE TO CLIENTS