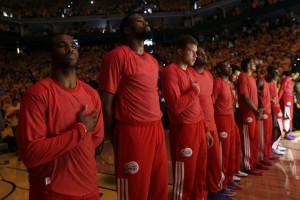 Members of the Los Angeles Clippers listen to the national anthem before Game 4 of an opening-round NBA basketball playoff series against the Golden State Warriors on Sunday, April 27, 2014, in Oakland, Calif. The Clippers chose not to speak publicly about owner Donald Sterling. Instead, they made a silent protest. The players wore their red Clippers’ warmup shirts inside out to hide the team’s logo. (AP Photo/Marcio Jose Sanchez)